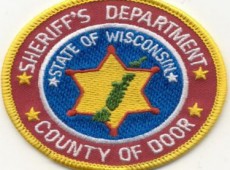 There was a hit & run fatality just north of Sturgeon Bay Saturday afternoon. The Door County Sheriff’s office reported that shortly before 5:30PM, a 71 year-old Sturgeon Bay woman had been struck by a Ford Escape S.U.V. on County Road “BB” (Gordon Road), a short distance west of Culver’s. The S.U.V., driven by a 43 year-old Sturgeon Bay resident, had been traveling westbound when the female pedestrian was struck. The S.U.V. then continued west until it entered the south ditch, struck some orchard fencing and eventually became entangled and stuck in that fencing. The driver then fled on foot. After a brief pursuit by law enforcement on foot, the driver was brought into custody.
Live-saving measures were administered to the female pedestrian who had been struck. After bring transported to the Door County Medical Center she was soon pronounced deceased.
That section of Gordon Road was closed off for six hours while the Wisconsin State Patrol crash reconstruction unit assisted with the investigation. Responding to the scene were door county E.M.S., the Sturgeon Bay Fire and Police Departments, and the Door County Sheriff’s office. The name of the crash victim is being currently withheld pending notification of family. We will report more on this incident as additional information becomes available.