Vikings Getting Ready for Wolves

The Vikings would eventually win the match over the Crusaders 25-17, 24-26, 18-25, 25-14, 15-8 after opening the tournament with wins over Salam and NEW Lutheran.  Coach Heidler says that this team is a strong, senior led team that plays well together and is also a team that is built for match play.  We asked coach Heidler who has been playing well for the Vikings…

The match against Hilbert is scheduled for 7:00 on Thursday with the winner playing either Randolph or Burlington Catholic Central on Saturday. 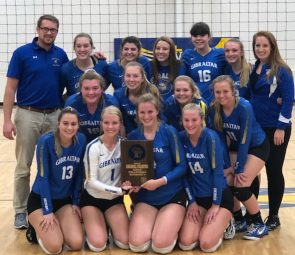 Luxemburg-Casco vs Notre Dame at Seymour