Storm and Tigers in Quarterfinals 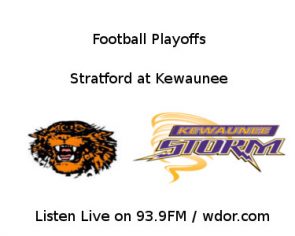 in the first two weeks of the playoffs and are led offensively by quarterback Ryan Carmichael, running back Owen Kudick and receivers McCoy Walechka and Alexander Hewett while Travis Reinke, Dylan Steinhorst and Tanor Bortolini led the the defense.  The Tigers (9-2) were ranked 5th in the final poll and have beaten Northland Pines and Colby in the post season and are led offensively by quarterback Max Schwabe, running back Kade Ehrike and receiver Okley Wrensch while the defense is led by Ben Barten and Justin Schoenherr.  Our coverage begins with the Jorns Chevrolet of Kewaunee pregame show at 6:45 with coach Randy Charles on 93.9FM /wdor.com