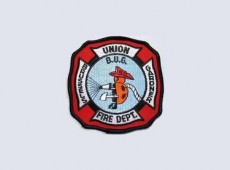 A home in Namur was extensively damaged in a fire early Saturday morning. The Brussels-Union-Gardner Fire Department was paged out at 3:48AM and found the two-story brick home at 1256 County DK fully engulfed in flames. Mutual aid was called in and units from Sturgeon Bay and Southern Door in Door County and Luxemburg and Casco in Kewaunee County responded. Two fill sites were set up at Massart’s Pond and Chaudoir’s Dock and trucks shuttled water to the scene. A Door County ambulance was on scene and the sheriff’s department shut down both lanes of DK and the Red Cross responded during the firefighting operation. The home owned by Gerald Dubois, across the road from the Belgian Heritage Center, sustained significant fire, smoke and water damage and is uninhabitable. While the initial blaze was knocked down quickly, firefighters had to contend with hot spots that reached the attic. The occupants, an adult and two children, were able to get out of the house without injury and the family dog was saved, but two cats perished in the fire. No cause or damage estimate is available at this time. Fire crews cleared the scene at 7:30AM.