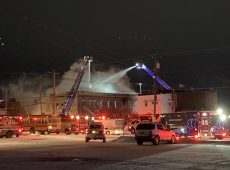 Shortly after 12:00 noon Friday, the Sturgeon Bay Police Department announced the arrest of a man associated with the Tuesday morning fire at Butch’s Bar that claimed the lives of two men and and sent another to a Milwaukee burn center. 57 year-old Anthony Gonzalez, who was a tenant living upstairs of Butch’s, was taken into custody Thursday without incident and transported to the Door County Jail.

Judge D. Todd Ehlers set his cash bond at $250,000, and his initial appearance in the circuit court is scheduled for 11:45AM this Monday. Gonzalez is also to have no contact with the families of the victims.